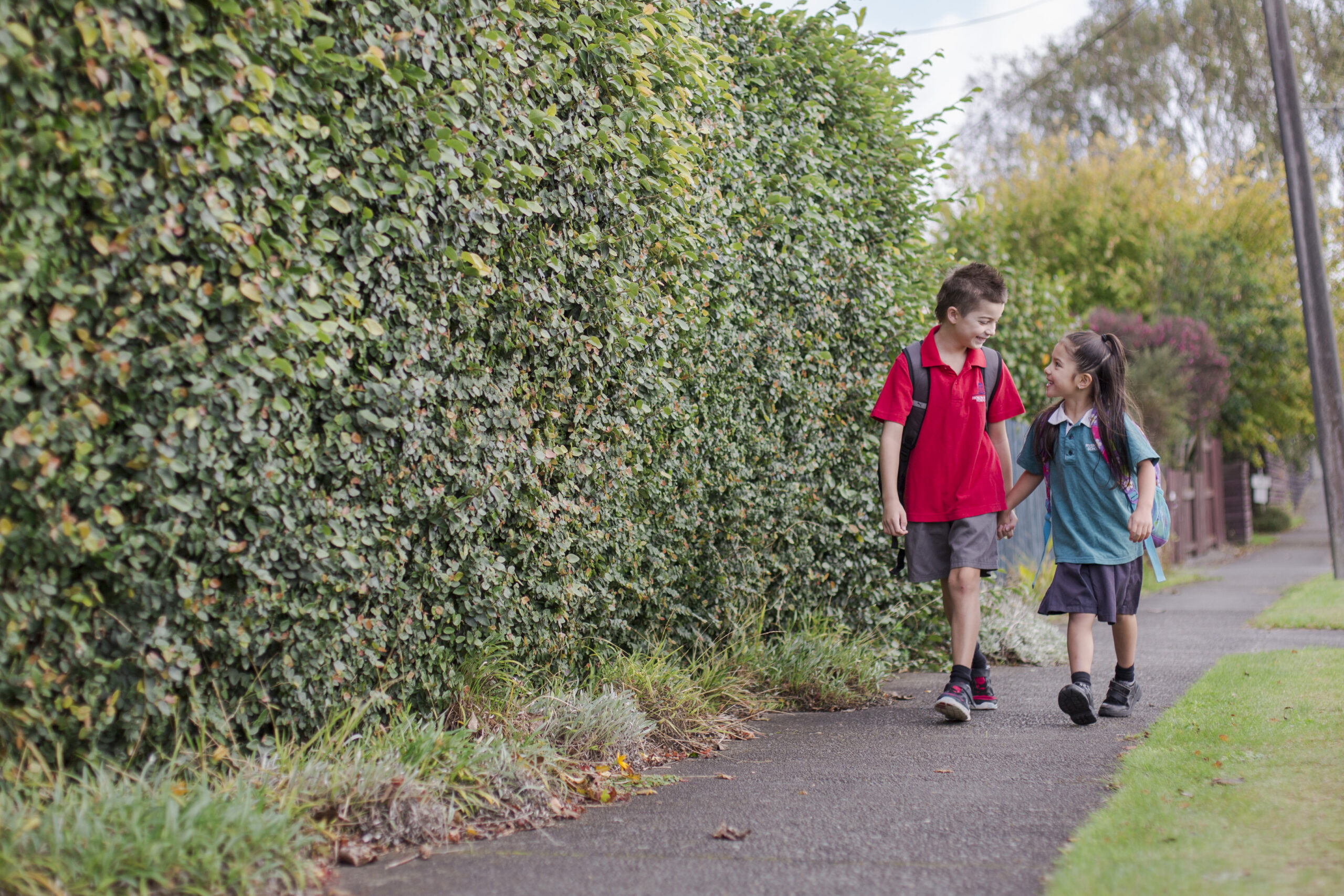 Despite warning signs, the New Zealand economy remains solid. Although slower than in recent years, New Zealand’s economy is growing at a reasonable pace, in fact better than most of our peer countries.

We’ve been seeing the indicators for a while now that economic growth will stabilise following it slowly losing steam since mid-2017. Infometrics data suggests there will be a pick-up in the housing market next year that will hopefully carry the economy out of its plateau, but continued slower global economic growth, low domestic investment, and slowing spending growth could potentially tip the economy in the other direction.

Manawatu’s regional economy grew by 2.2% in the year ended September 2019. This is just below the national growth rate of 2.4% and although still relatively strong, does reflect the slowing growth evident across many New Zealand centres.

Strong retail spending indicators, favourable returns to exports produced in our region, and population and house price growth implies that the slight weakness in GDP estimates for the region was heavily influenced by a temporary fall in regional non-residential consent values. Specifically, the value of non-residential consents decreased by 29.9% over the year to September. By comparison the value of consents in New Zealand increased by 12.7% over the same period. But this decline isn’t as dramatic as it first appears. Consent values were up 85% the year before which is a significant increase, so a decline this year is expected. Significant investment planned for the region to 2022 and beyond will significantly boost non-residential consent values, stimulating employment and economic activity in the region.

In contrast, annual average growth in new dwelling consents increased by 9.3% over the year to September. While this is below the New Zealand growth rate of 12.0%, continued growth in the number of new dwelling consents reflects increased demand from strong population growth and the confidence of investors to contribute to the regional housing market. To meet housing demand, there is no doubt that more houses need to be built and fast. Housing supply growth is essential to provide for wellbeing in our region and to retain our affordability relative to other parts of New Zealand. With population growth forecast to continue and more land set to be released to the market in 2020, we expect new dwelling consents to increase substantially over 2020 and beyond.

Electronic card spending on retail purchases increased by 4.0%, compared with national growth of 2.6%. The continuation of strong growth in retail spending reflects the confidence of households, they’re feeling confident and secure with employment and household incomes.

According to our Marketview retail report, our residents are spending more on food and dining, but less on takeaway – this could also signal a higher confidence and feeling of stability from our residents who have strong incomes.

Manawatū is affordable and its central location lends itself to many visiting friends and family, and a strong events scene with national tournaments and speedway playing a big part in our overall numbers. Manawatū’s consistent growth in the visitor sector suggests that Kiwis are still travelling, albeit with tighter budgets, with 80% of our visitor market being domestic. Palmerston North has high general retail share, despite weak growth nationally which is attributed to more online spending and less domestic travel.

Overall our tourism spend increase was just behind New Zealand’s overall increase but only marginally. Why’s that? Well this can be attributed to higher fuel prices discouraging travel and disrupted road routes such as the Manawatu Gorge closure. But there is light at the end of tunnel with road improvements underway such as Transmission Gully and the Otaki Expressway. 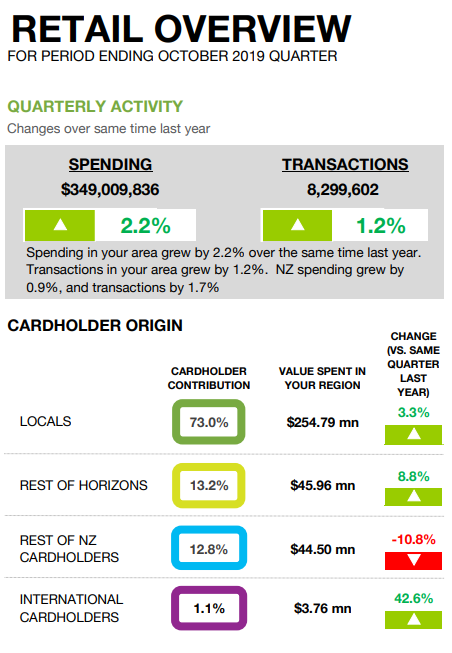 With the significant growth our region is experiencing, there are also big challenges that come with this. We do not have enough housing for our region’s population, which is a major concern as big development projects come to our region creating more jobs. We need more people, but there’s a significant housing supply shortage so we are now seeing the private sector, councils and government responding by rezoning land and growing new settlements.

As a region, we are struggling to keep up with new house builds – always just that little bit out of reach. The number of new builds is increasing but not at a fast-enough rate to keep up with demand. In positive news, we are slowly bridging this gap with 165 new residential building consents issued this quarter compared to 142 this time last year.

Our population estimates have increased by 3.6% between September 2018 and September 2019, so the pressure to keep up with all that comes with an influx of talent and their families – housing, schools, jobs and of course housing – is a very real issue that needs addressing and fast.

On the plus side 2020 will see more land coming onto the market and smaller houses built. The spin-off of this is greater intensification in areas that are already built-up and at capacity such as city centres.

We are currently seeing an influx of landlords selling up because of the high ROI in the housing market, so renters are now limited in their options. Because of this, renters are having to move closer to the city, which is more expensive, because there are no regional renting options available. Again, we’re an affordable option for many Kiwis, which is great, but we can’t keep up with housing demands as is.

Manawatū consumers remain optimistic about the economy but are becoming increasingly cautious in their outlook. This caution can be seen in consumers’ reluctance to make major purchases with car registrations in the region down 3.5% in the September 2019 (national registrations declined by 8.5%). In saying that, business confidence looks to be as strong as ever in the region as the number of commercial vehicles registered increased by 16.9%, this compares to a national decline of 1.6%.

As it was a Rugby World Cup year, many fans set out to purchase the most up to date appliances in order to enjoy their national game streamed online. This relates to the high spend in appliances and hardware, again highlighting consumer confidence that comes with a solid job market and performing economy. We will most likely see a decline on this next year.

We’re also out spending in our local community with the city’s CBD retail spending experiencing its best growth since 2016, which was when we started collating the data. The Marketview retail report shows very strong growth in Palmerston North’s CBD, with spending up 4.9% (a significant growth rate) from last year in the three months to October.

Jobseeker support recipients are also up, growing 6.9% in the region in the September 2019 year, compared with 10.3% growth nationally. We tend to attract many jobseekers as our housing is more affordable than the major centres in New Zealand.

Although we’re sitting higher than New Zealand’s annual average unemployment rate of 4.2%, we’re making strides in rectifying this and trending down overall at 5.2%.

So, all in all our region is in great shape, and despite the challenges that come with accelerated growth we can take confidence that with strong consumer and tourism spending, favourable returns to locally produced exports as well as population and house price growth, our dynamic region is not easing up anytime soon.

Key Insights for this Quarter

Please find the full reports, below.