Falling business confidence, record high petrol prices and stabilising house prices in larger cities are just some of the headlines dominating national media, and while there are concerns the national economy is cooling off, it is still growing strongly. GDP rose by 1 per cent in the three months to June 2018, the strongest quarterly growth in two years and quarterly retail card spending in the September 2018 quarter rose at its fastest pace in seven and a half years, Stats NZ said.

Palmerston North and Manawatu’s regional economy is strong and growing, and business and consumer confidence is also on the rise. This sentiment is driven by strong export trade conditions, record high house prices supporting rising consumer spending and a great deal of construction activity that’s showing no signs of slowing. But that’s not to say Manawatū is immune from the weakening national confidence and barriers to growth like labour skills and house shortages, the pain of which are already being felt. 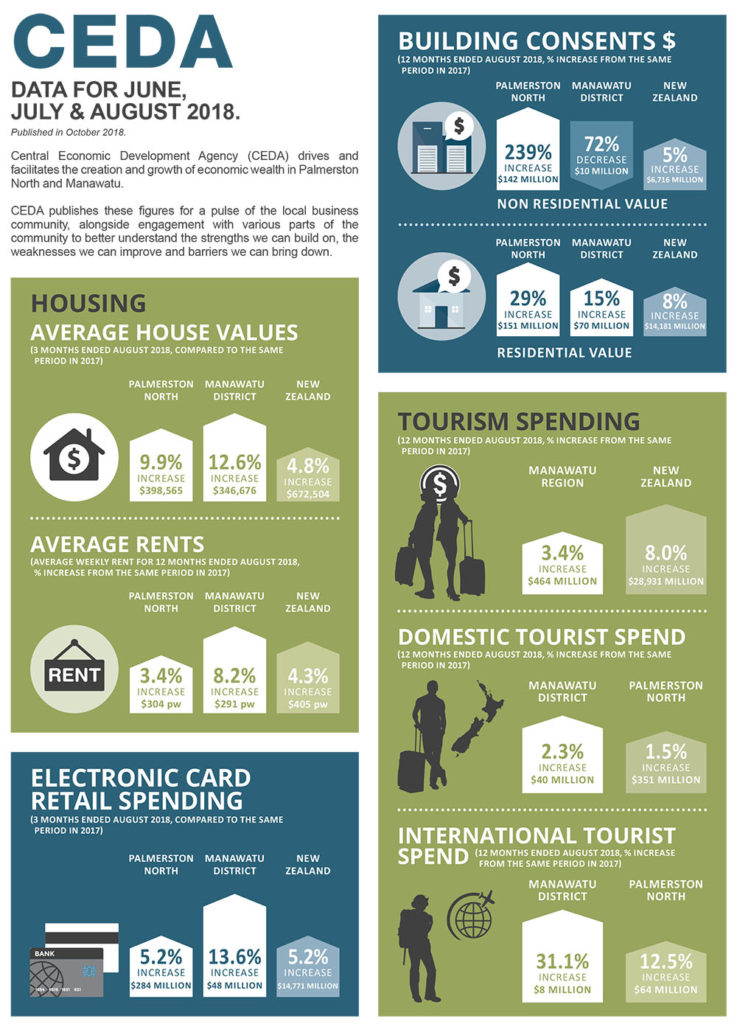 SB: The regions are the powerhouse of the New Zealand economy. The city’s economic growth increased by 3.4 per cent alongside the district’s growth of 4.1 per cent, in the year ended June 2018. This compares with the national economic growth of 2.7 per cent. While Infometrics indicates strong growth across rural New Zealand due to export trade, levels of growth in Palmerston North now exceed both national growth and growth of our largest urban centres. This is good news for the Manawatū Region!

PC: Record levels of building activity in Palmerston North is really driving growth in the city. $293 million worth of building consents (for new housing and non-residential) were approved in the year to August 2018, well above the previous peak of $221 million the year to April 2008.

How does this peak compare to previous years and what trends are you seeing as a result?

PC: Consent values in the city were just $106 million in the year to August 2014 alongside $41 million in the district to the year ended April 2014. This rapid increase in building activity over the past four years has led to demand for more labour. To meet construction demand, building businesses from outside the region are coming here to take up work opportunities. This growth in employment and workers is adding pressure to an already tight housing market in the wider region, which is driving the city and district’s house prices up, while national growth in house prices is slowing.

The region’s population is growing, what insights can you share?

SB: The Manawatū region’s population has grown by an estimated 1,900 people, or 1.6% in the year to June 2018, according to Statistics New Zealand. The district has seen an increase in its population of 600 people. This is a 1.9% increase in population in the year to June 2018. The strong rate of population growth across the district is driven by employment growth, increasing employment opportunities and household incomes, high quality schools and social infrastructure alongside proximity to the labour markets of Palmerston North, and specialist health services of MidCentral District Health Board.

Housing affordability is a drawing card for the region – are rising house and rent prices putting the city and district at risk of losing that?

PC: QV data shows that average house prices in Palmerston North in the three months ended August 2018 were 35 per cent higher than three years ago, while national house prices increased by 26 per cent over this period. However, the dollar value increase in the city was smaller than the national increase, due to a lower starting point in 2015. Over the three years, average house values in Palmerston North increased by $104,000 while national house values increased by $138,000.

SB: The figures are similar for the district, with house prices rising 41.8 per cent to the three years ended August 2018. The average price of houses in the district are now $102,000 higher than they were three years ago. The increase in house prices reflects the current strength of economic conditions in the region. However, it also signals an under supply of housing relative to strong demand. Palmerston North City Council is aware there is a shortage of land for housing development and is working with developers to release more land to the market. The Manawatū District Council has a lead programme in place to roll out key infrastructure over the next 20 years. This initiative will support the staged development of key residential and industrial growth areas in and around Feilding.

SB: Growth in the district’s economy remains strong due to the above factors. Supply conditions have further supported export incomes with volumes up to the year ended August 2018. As a result, we are seeing strong labour market conditions, the continuation of strong housing demand and house price growth, and strong growth in consumer spending. Concerns include the impact of petrol prices, future trade and global demand conditions, and changing central government policy. In the current climate, the risk of rising international interest rates is also raising concerns for heavily indebted households and farming operations.

Domestic tourism spending has softened in the city, why?

PC: Growth in domestic tourism spending has been weak in Palmerston North in the first half of 2018, but that followed very strong growth in late 2016 and early 2017 due to the impact of the Kaikoura earthquake on retailing in Wellington’s central city and Lower Hutt. There was a 16.5 per cent increase in Wellington region visitor spending in the year ended August 2017, but a 4 per cent decline in the year to August 2018.

Strong growth in international visitor spending – where are these visitors from?