Manawatū Economy Growing Faster than NZ – What Does This Mean?

The Manawatū region’s economy is growing faster than the national average for the first time since 2011, according to the Manawatū Region Quarterly Economic Update.

The regional economy grew by 3 percent in the year to March 2018, faster the national rate of 2.7 percent. The Manawatū district grew faster at 5 percent than Palmerston North’s at 2.5 percent, reflecting different drivers of economic activity in our region and New Zealand in recent months.

The Palmerston North city economy differs from the Manawatū District. While they are closely connected and are complementary, they also have a different economic and demographic makeup. Despite the differences, there is a common theme of increasing business and construction investment across the whole region.

The strong economy is reflected in high employment levels, particularly for trades and services, and good growth in retail spending and the housing market.

There are fewer unemployed in the region; job seeker benefits in the district fell by 13.7 percent in the year to March 2018. Strong hiring has reduced the number of unemployed residents, and as a result future hiring will be more difficult with a shrinking pool of available labour.

$2.5 to $3 billion of major development and construction projects announced recently will be a major boost the region’s economy through to 2030, he says. 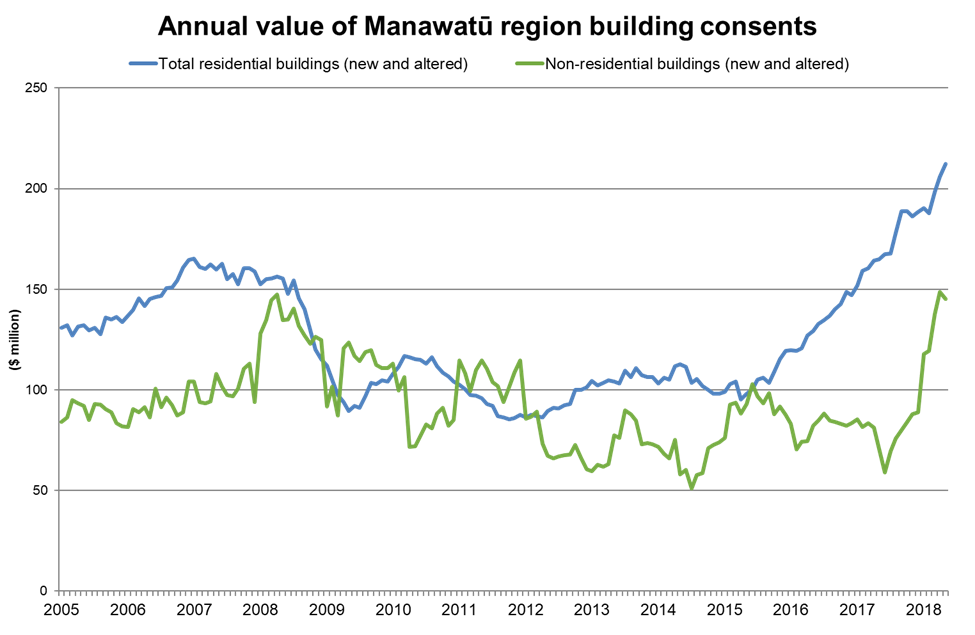 “Record consents is confirmation of growing investment supported by high business and consumer confidence in the region,” says Crawford. “This investment in buildings and businesses, and related jobs will benefit the region for years to come.”

Good growth in the economy and jobs was not enough to dent jobless numbers. Job seeker benefits in Palmerston North increased by about 100 over the year to 2,452 in March 2018. This may have been due to recent population growth in the city from overseas migration, the city’s refugee intake and an increase in school leavers. We are working closely with the Ministry of Social Development to better understand the reasons behind the increase and what we can do to support job seekers in our city. 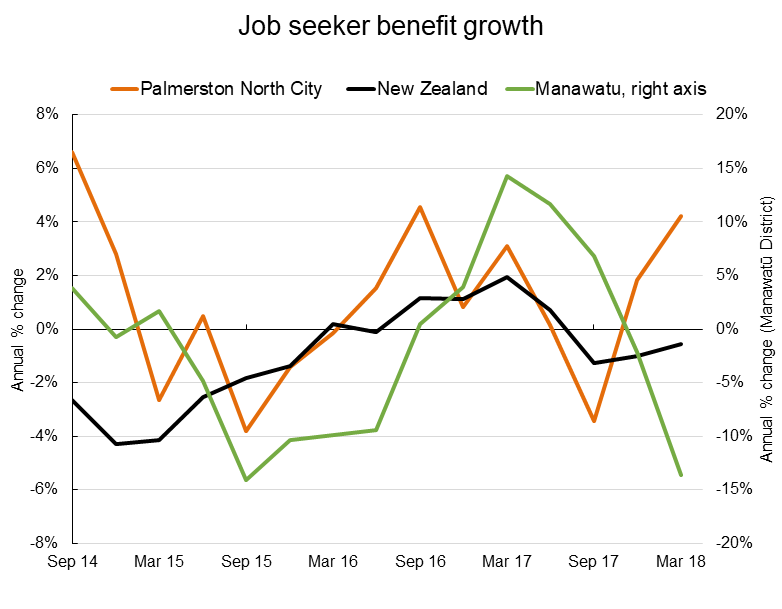 The regional economy is in good shape. The economy is growing strongly and there are more jobs. The drivers are different, but the outlook remains positive. Firms are still in hiring mode, reflected in steadily rising number of job ads, according to ANZ Bank. 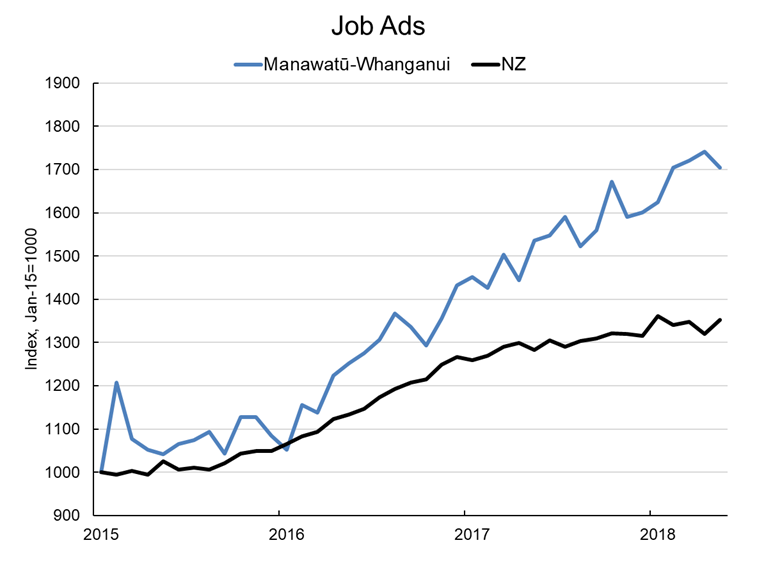 The growth in the economy, jobs and incomes is reflected in growing retail spending. Retail spending in the March quarter grew by 4.6 percent from a year earlier, slightly higher than the 4.1 percent national rate, according to the latest Marketview Manawatū Region Quarterly report.

Fast growing new car registrations confirm business optimism and economic growth. Manawatu’s registrations grew 8.8 percent in the year to March 2018 (NZ’s was 4.4 percent). Commercial vehicle registrations were even higher, with a 27 percent increase in the region in the same period (NZ’s was 13 percent). Manawatu’s growth is above Hamilton city and almost double that of Tauranga city. Car registrations have slowed in recent months across New Zealand, although it is unclear whether it reflects slowing demand or disruption from Stinkbugs, which were discovered in shipments of imported cars that were held up in ports as a result.

So, what does all this mean for Manawatu?

CEDA Chief Executive Linda Stewart says the growth in GDP and record-breaking value of consents is positive for the region but is likely to intensify existing skills shortages region-wide.
“It is great to celebrate growth, but we need to plan for the pressures that are likely to occur as a result. We’re hitting record highs for the value of consents and we need to be deliberate in training and attracting staff to realise these projects.”

CEDA is involved in a collaborative approach to address skills shortages with Talent Central and the Ministry of Social Development to help residents who are receiving a job seeker benefit to become work ready. The programme is making good progress, but there is still a way to go.

“Employers will need to look further than the local market to grow their workforce. Poaching from other local businesses will not solve the regional shortage and will increase competition and business costs in an already competitive market.”

We are keeping a close eye on recent weakness in national business confidence and economic indicators. While our region is performing well, and the outlook is positive, weakness in the national economy can affect us.