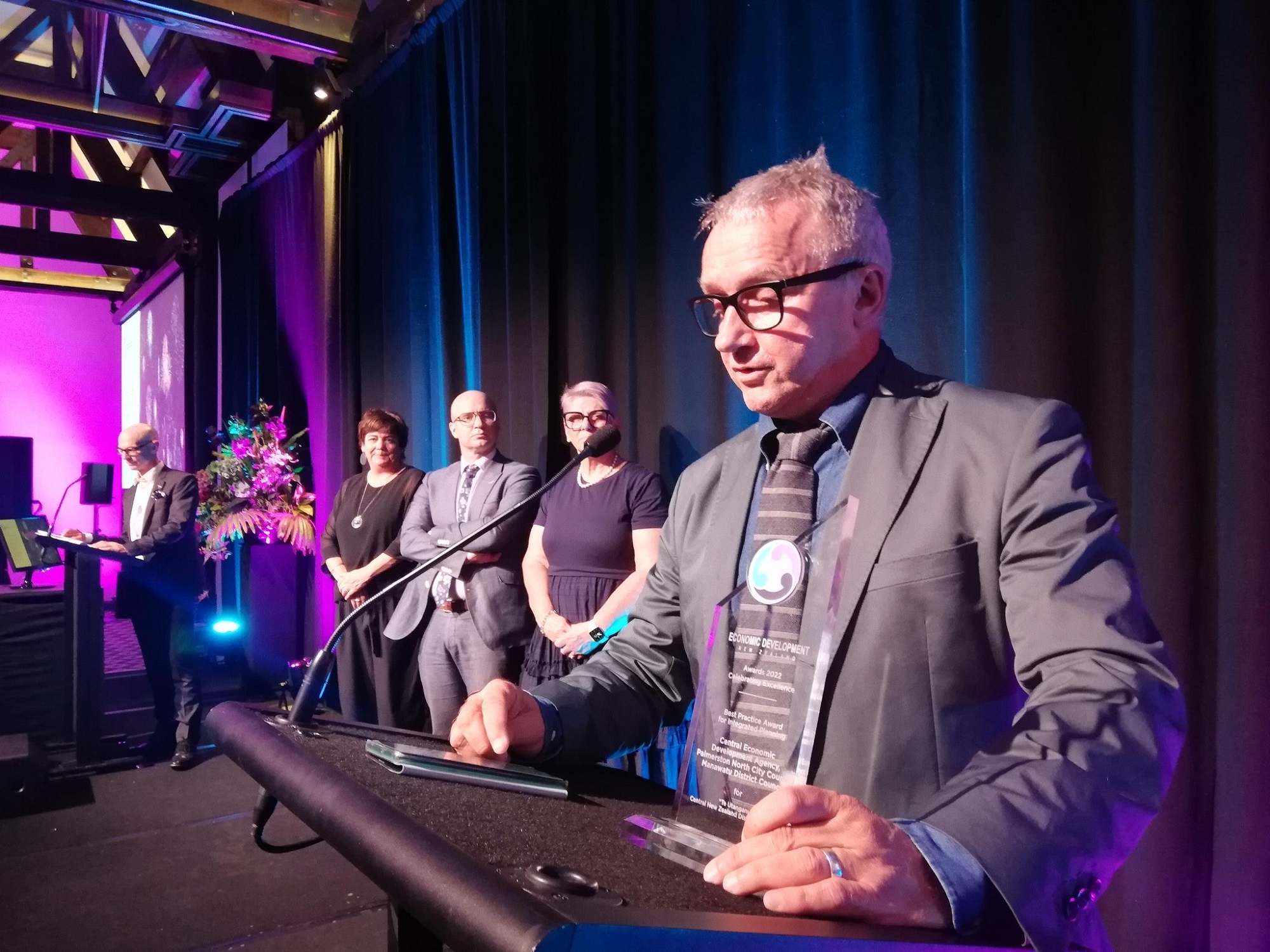 Te Utanganui | Central New Zealand Distribution Hub, is a unique multi modal distribution hub in the lower North Island of New Zealand, consisting of rail, road, air, and sea via port connections. The name was gifted to the project in 2021 by Rangitāne o Manawatū.

Chief Executive at EDNZ Susan Houston said, “The CEDA led project was highly thought of by the panel since it was not only unique and innovative, but also highly collaborative, bringing together both the public and private sectors, and in doing so delivering a highly integrated plan.”

This award for Te Utanganui highlights the collaborative efforts of the CEDA led project, which works alongside the teams at shareholder councils Palmerston North and Manawatū District and presents exciting economic growth for the region.

CEDA’s Chief Executive and Te Utanganui’s Strategy and Investment Lead, Jerry Shearman says a project of this size and scope for the Manawatū region is considered a major pillar project, and receiving this award is recognition of the wider teams’ collaborative work.

“This work will see not only the region, but central New Zealand benefit hugely over the coming years with businesses and investors recognising the advantages of Manawatū.

The hub, located within Manawatū, north-east of Palmerston North near Bunnythorpe and encompassing Palmerston North Airport and its Ruapehu Business Park, complements the Golden Triangle (Auckland-Hamilton-Tauranga) and southern Christchurch node. It will act as the third node in New Zealand’s national transport and freight network, perfectly positioned in central New Zealand.

In the heart of the lower North Island, Manawatū is currently experiencing unprecedented levels of growth fuelled by significant public and private investment with more than $8 billion of transport and infrastructure investment planned and under way in the next 10 years.

“Te Utanganui is expected to take development in Manawatū to the next level, building on infrastructure initiatives already planned for the area,” says Murphy.

Winning this award is recognition of the scale and depth of collaboration and integrated planning that has occurred here and demonstrates what can be achieved through partnerships,” adds Shearman.

With freight volumes in New Zealand expected to increase significantly in the coming decades due to population growth and increasing competition, Te Utanganui provides an enduring and future-proofed transport network to support this growth.

Manawatū District Council’s General Manager of Infrastructure Hamish Waugh, says that the district is well underway in its preparations for the investment that is being made in the wider region.

“We’re ensuring that we have capacity for growth in water and wastewater infrastructure, as well as the development of the Kawakawa Industrial Zone and our residential growth precinct in the north of Feilding,” says Waugh.

The following hero video was presented at the EDNZ Gala dinner in conjunction with the award for ‘Best Practice Commendation for Integrated Planning.’

The EDNZ Awards
The EDNZ awards were Launched in 2017 to reward and celebrate thought leadership and showcase best practice throughout the network of New Zealand economic development professionals. Since then, the annual awards have become an integral and very popular part of EDNZ’s annual conference.

The winning entrants are typically highlighted in the EDNZ Journal so that the network can delve more deeply into the initiative and assess how relevant it might be for their community. The number of Award entries are growing every year with a total of 40 received in 2022.